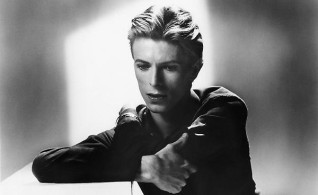 (Today’s blog post is part of a continuing series of personal stories about living with Trigeminal Neuralgia, the most painful diagnosis known to man.)

This post has absolutely nothing to do with my life with Trigeminal Neuralgia but everything to do with how I became me.  A little self-indulgent perhaps, but I hope it resonates with some of you in your own personal way.

David Bowie died.  I woke up to the news dumbfounded and speechless. I didn’t know he had cancer.  I didn’t know he was purposefully staying out of the limelight.  I thought it was just one of those moments where he would take a break and enter back into the public eye in a different way than we had seen him before.  He has a new album out, heavily influenced by jazz, and I was looking forward to seeing him bring his own brand of debonair ease to the PR circuit.  It had been too long since we’d seen him and alas now we never will.

I can’t think about Bowie without thinking about my old house on Cherry Lane.  About what I was like when I was young.  But mostly I think about my mom, who like Bowie, died much too soon over ten years ago.  She was 68 when she passed.  He was 69.

The radio was always on when I was growing up.  It served as the musical score for activities taking place in our kitchen – and in my house almost everything took place in out kitchen.  The Rolling Stones, Led Zeppelin, CSNY were among favorites when I was very young.  Eventually, AM radio gave way to a turntable from which bands like Genesis, The Boomtown Rats, XTC and Prince could be heard.

And then there was Bowie, played on heavy rotation, especially when I was in high school.  It wasn’t uncommon to come home from work to hear “Ashes to Ashes” or “Changes” blasting so loud it could be heard from the driveway.  If I had a new friend in tow, they would invariably say, “Your mom must not be home.”  “That is my mom,” I would reply while opening the front door to the full wall of sound.  And his sound was something that couldn’t quite be categorized.  It was amorphous without explanation and his fans were more than happy to go along for the ride.

It wasn’t just his music that drew my mother, and I, to Bowie’s talent.  It was the confident and effortless way he transformed himself from the androgynous Ziggy Stardust to a stylish punk in black leather to the suave performer in stylish suits along with many other looks in between.  He, as well as many other artists of the late-70’s, gave people like me permission to be different.  It wasn’t for difference sake alone but rather because it was an extension of the person that is me.  I grew up in an era where the preppy look was the standard and my sensibilities never connected with that style.  I didn’t dress the way that I did, all in black with heavy eyeliner to make some statement on society.  I just liked it.  It was how I felt most comfortable (and still is to this day).  And I was fortunate to have a mother who took pride in my being different.  I’ve always thought she lived somewhat vicariously through me in that way. That she took delight in raising a kid who didn’t buckle to the mainstream because although she looked every part a Mom, buckling to the mainstream was just not in her DNA.

The death of David Bowie doesn’t lay to rest those memories of mine, they will always be with me just as the many other memories I have of my youth.  But in musical terms, his death is something of a coda to the soundtrack that was so prominent in those days.  I will always love his music, but that loved turned bittersweet when my mom died.  Now I have another reason to feel melancholy, yet I am grateful for the indelible impression he made on my life nonetheless.  And of course, my gratitude toward a mom who didn’t try to change me is limitless.

Although British, one of Bowie’s best known song is titled, “Young American”.  At the end of the song, Bowie sings in a fast stream of vocals then the song sort of stops and the backup singers come in with the line, “I read the news today oh boy.”  It’s a moment in the song that no matter where I am, I always sort of take a pause and wait for it, and for the end of the song that commences afterwards.  Sadly, I read the news today oh boy, there will be no more new songs.  R.I.P. David Bowie.  May God’s love be with you.