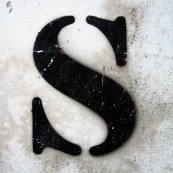 (Today’s blog post is part of the Blogging From A to Z Challenge during which writers all over the world blog each day in April based on a corresponding letter of the alphabet.  These are my personal stories about living with Trigeminal Neuralgia, the most painful diagnosis known to man.)

Question:  What’s the difference between living with TN and being in solitary confinement?

Oh, and most of us aren’t psychopathic criminals.

I tend to stay up late.  Unlike a lot of people with TN, I actually feel better around midnight, so I’m routinely up until around two o’clock.  One night I was noodling on the computer and flipping through the TV channels when I landed upon one of those reality shows about prison.  It might have been “Locked Up” or “The Women Of XY Prison.”  Something like that.

The show was describing the life of people who are in solitary confinement.  How they have little outside contact, only get to exercise for a brief amount of time per day, eat a crappy diet, etc.

“Wow.  That would suck,” I said to myself (although I didn’t really feel sorry too for them).  That’s partly because I got the theme song for the old TV show, “Baretta”, sung by Mr. Sammy Davis, Jr. stuck in my head.  “Don’t do the crime if you can’t do the time…”

Then it dawned on me…their lives are a lot exactly like mine.   Sure, I can use the phone whenever I want and I don’t get my bedroom tossed by someone looking for a shiv.  But it is solitary.  And since I think I have a pretty nice home, it is refinement as opposed to confinement.  I’m not constrained by anything but my TN – but that’s quite substantial.  I suppose it’s a good thing that I’ve always been a loner to some extent because if I was a “pack animal” I’d be going insane.  Maybe I will commit a crime.  Something classy though, like a jewel thief.  Prison may look a bit “rustic” for my taste but at least I could talk to the guards.  And jumpsuits are in right now.