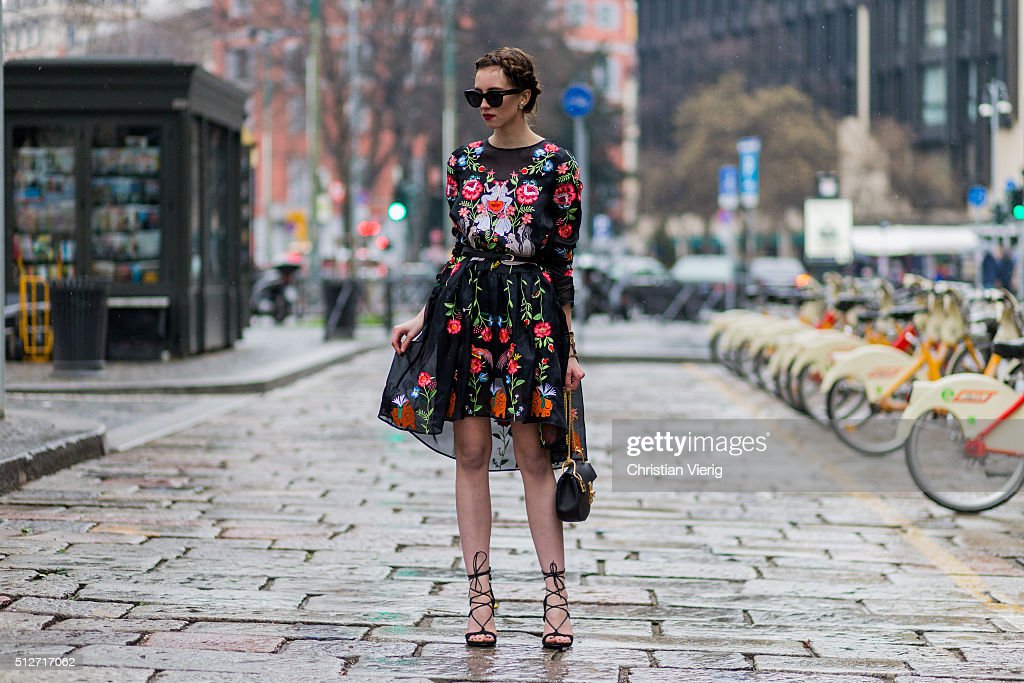 (Today’s blog post is part of a continuing series of personal stories about living with Trigeminal Neuralgia, the most painful medical condition known to man.)

I haven’t written a blog post in a while (thanks to those of you who noticed) and I figured it was time to get back in the ol’ blogging saddle.  Some interesting things have happened since I last wrote.  For starters, I lost my vanity.  And by vanity, I’m talking about the personality trait, not the cabinet in the bathroom.  I didn’t lose all of it, but I lost most.  Okay, not most, but some.

To explain why this happened, I have to tell you about what’s been going on the last five months or so in a section of this post that could have the alternate title of “How I Spent My Summer Vacation”.  See that picture up there?  That’s how I envisioned my summer vacation.  Me, in a pretty dress, walking along the sun-dappled streets of the city.  Yes, that’s a picture of a super model in a designer frock walking in Milan, but it was my vision and visions tend to err on the fabulous side.  I actually got a good start.  After many years in the suburbs, I found a great apartment in Chicago.  It’s closer to family, heck, it’s closer to a lot of things than my former place which was tucked in the middle of nowhere.  I felt pretty good about the way things were going, which, as my blog’s name implies, always means the other shoe is going to drop.  And drop it did.

Hopefully, I can write this part of the story with some brevity.  It all started with a case of hives.  I’ve had them before and didn’t think anything of it.  I went to the Urgent Care place, got my five-day pack of steroids and was on my way.  In this instance, “on my way” turned into a fever spiking up to over 104 degrees, chills that mirrored convulsions, two weeks in the hospital and more blood drawn, biopsies and MRIs than most people will have in their lifetime.  I was quite a celebrity at the hospital for a while because no one could quite pinpoint what was wrong.  Doctors would glide in and out tell me their specialty – Hematology, Infectious Disease, Surgery, etc. – then float back out writing instructions for more tests to challenge my fever-ravaged body.  (There’s a Portillo’s across the street from the hospital, so I did get frequent chocolate malts from my dad, which was a welcome upside.)  The ultimate diagnosis?  Something called Still’s Disease – an autoimmune/rheumotological condition that affects the bones and joints, causes the rash and has the dangerous potential for one’s temperature to go from normal to boiling in a matter of minutes.  As if having one rare, incurable, sometimes debilitating disease wasn’t enough, I now have two.

And here’s where the vanity part comes in.  The treatment for my new condition is a combination of yet more drugs, in addition to the plethora I already take for TN.  And, as usual, they come with side effects.  I am now taking steroids daily, meaning I have ballooned up like a puffer fish, complete with “moon face” effect and twenty pounds gained in about six weeks.  And, in order to stay on as low a dose of steroids as possible without my liver exploding, I am taking a chemotherapy drug weekly – or rather weakly – as it has sapped me of most of my energy.  Oh, and my hair is getting thinner, which is exactly what you want to have happen while your face is getting fatter.  Right?  The overall impact of this situation has essentially eroded my willingness to care how I look about 70% of the time.  It just doesn’t matter.  I roll out of bed, smooth my hair down as much as possible, brush my teeth, wash my face (maybe) and am on my way, usually in stretchy pants and big t-shirts that support my expanding self.  Oh, I do shower (maybe) but I do that at night because on many days, the thought of blowdrying my hair is more energy than I can expend.

Here’s the thing…it’s actually kind of great.  I’m not saying that I’ve completely given up. I’m trying to offset the plumping with healthier eating.  I clean up when appropriate.  But if it’s just a lay-about day, or maybe one where all I need to do is run to the grocery store, my new mantra is “Fuck it”.  And I kind of love that.  And honestly, I’ve realized that people don’t really stare at me as much as I expected.  Some do, but they probably stared at me before.  That’s not because I’m gorgeous.  Back before I bulked up, I was a solid 7 on a really good day, something I came to terms with long ago.  I just dress a little punky for someone my age.  Contrary to my disheveled appearance, I’ve actually become friendlier.   I talk to people at the store, say  “good morning” to people on the street, all while looking a way that would never be acceptable to me before.  They may be thinking, “who is this fat-faced, scraggly haired woman in a black leather jacket and why is she talking to me,” but it just doesn’t matter.

I know I’ll care at some point but for now, I’m just gonna roll with it.  Or rather “rolls” with it, as in the ones I have on my newly ample chin.  And, now I can add I’m adding a new audience to my blog – my fellow “Dragon Slayers” of the Still’s Disease community. Welcome to my blog.  So sorry you’re here.

(If you’d like to read my blog from the beginning, here’s a link.  Although I write about having Trigeminal Neuralgia, you may find you are kindred spirits of the TN “Warrior” community.)